Well not quite sure where all the time has gone. I wrote this post back in May. Oooops. Note to self – make sure to press the publish button extra hard next time! I was just going to delete it but actually we had lots of fun so posting it anyway.

Easter Holidays were still in full swing as April arrived. While Daddy had to work, the children and I made the most of the sunny spells in between those April showers to get out and about. They love nothing more than pulling on their wellies and traipsing around exploring the woods. We are really lucky to have the Lickey Hills practically on our doorstep. A picnic lunch later and we were set.

The wellies were a really good call, mine are on their last legs but a quick gluegun repair before we left saw me through. Make do and mend and all that. We did quite well until Zach made a beeline for the park, detouring from the lovely dry path right at the end, to walk through a swampy bog of smelly mud!! True to form he got stuck, lost a welly and while I was rescuing Connie who followed him like the dutiful little sister she is, a lovely lad came and rescued him, probably ruining his trainers in the process. Cue mortified Mum moment. A ride back in the car dressed only in his boxers and a T-shirt hopefully reinforced the lesson not to run off but I guess only time will tell.

I love the wonder of nature. We found some great stuff while we were walking. The root of this tree that had fallen over was amazing. It looked like something off an alien movie set. The kids were totally intrigued. The roots of another one had formed a set of natural steps down. I told the children they were fairy steps. A favourite book when I was little, was the Magic Faraway Tree by Enid Blyton. We always keep an eye out for it when we go to woods and listen for the trees saying ‘whisper, whisper, whisper’. I’d love a go on the slippery slip.

I am a tad over excited that Connie Moo has been offered a school nursery place for the Summer term. It will mean that all of them have at least started at the same school. Connie is very excited too. She goes to preschool already but we are going to pay the top up so she can still go there and to school. Fulltime, eeekkkk. I always thought that with her being my last I would relish the time at home with her, whether it is the fact she is a girl, number 4, I am getting old, or just that the wind is blowing in a certain direction. I am ecstatic to have her booked in. While I love every inch of her I cannot take my eyes off her for a second. She is a minx! An angel to look at. No- one believes me. I sent photographic proof to nursery in the end.

Another day and another trip out for the small people, this time a combined trip to deliver my sister’s birthday pressie and to go to Habberley Valley. I used to go a lot as a child, in fact I remember eye rolling everytime we went as we only lived on the estate just at the top. My favourite part was walking through the bluebells and climbing over the mahoosive (I was only little) rock in the middle. When I went back for the first time I was really disappointed by how small the rock was, oh how your perceptions change when you grow up.

Peckett Rock is covered in names carved in to it. It is fairly easy being sandstone. My Mum and Dad apparently carved theirs many years ago. I wonder if they are still there? As I said we have gone there for as long as I can remember. These photo’s were taken of me and my little sister when I was about 18 (which is quite a long time ago tee hee) I am pretty sure we are in almost the same spot as my little ones in the picturess above. Now I am older I can appreciate it all a lot more, you can read more about the valley and Peckett Rock here.

There are some fascinating old photo’s of the valley. There used to be a massive wooden swing, the valley was a popular destination for daytrips and Sunday school outings. It was even bombed during WW2. My Gran remembers going to the valley with Grandad when they were still courting.

April has been such a lovely month. We got our first bluebells; Connie was ‘big excited’ for her first day at nursery school and we rescued a snail because it was raining. The children were worried it would either be drowned or stepped on. We had to look for the snail every day for the next fortnight, needless to say it was so traumatised by its first encounter with us, it was never seen again.

We have had some gorgeous sunny days this month. It has benn lovely to get out and about again after the winter. Josh made it home from work for a weekend and we walked the little ones down to a local park. Hard to believe this is Birmingham looking at the pictures.

Josh adds a whole new dimension to a walk out. One minute dangling his little brother over the stream, the next happily playing pooh sticks with them. There was a lot of giggling and excited squealing today 🙂

It has been the start of my beginner’s patchwork class at the Tea Shop in Barnt Green. I had a lot of fun putting the packs together. I went for Spring colours, as it is spring after all. I am looking forward to seeing how all my ladies get on over the next few weeks. I will post more pictures, I promise.

April also saw the end of the rugby season, a very traumatic time for the males of the household. A not so traumatic time for me hehehe. There were a couple of festivals to round things off. It is definitely getting easier now the little ones are getting a bit bigger. It is also useful to take rugby son’s best mate along. Instant small people amusement. Connie loves Matt, I’m not sure Matt loves Connie quite so much 🙂 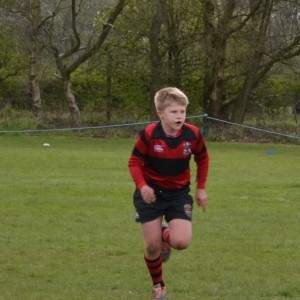 I hope you are all having an equally lovely spring so far.

Lots of love till next time.